The new Neutron Reflectometer NeRo has been built at the former location of TOREMA 2. The instrument is designed for measurements of thin film systems including polymer and magnetic samples using cold non-polarised neutrons with high resolution. Optionally, polarised neutrons are useable. 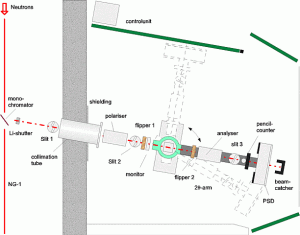 The setup of the instrument is shown in fig: A focussing monochromator crystal (graphite) diffracts cold neutrons with a wavelength of 0.433 nm. The collimation path is defined by two variable slit systems for setting the beam divergence. The sample can be moved in the horizontal direction and rotated with an angular precision of 0.001°. With the angular range of the detector now extended to 100 degrees high angle diffraction experiments are feasible for Q-values up to 2.2 Å-1 (4.4 Å-1 using λ/2). A 2-D position sensitive detector (He3, area 30 x 30 cm2) as well as a pencil counter can be used for neutron detection. The heavy load goniometer allows flexible sample environments including cryostats for low and high temperatures and magnets with high magnetic fields.